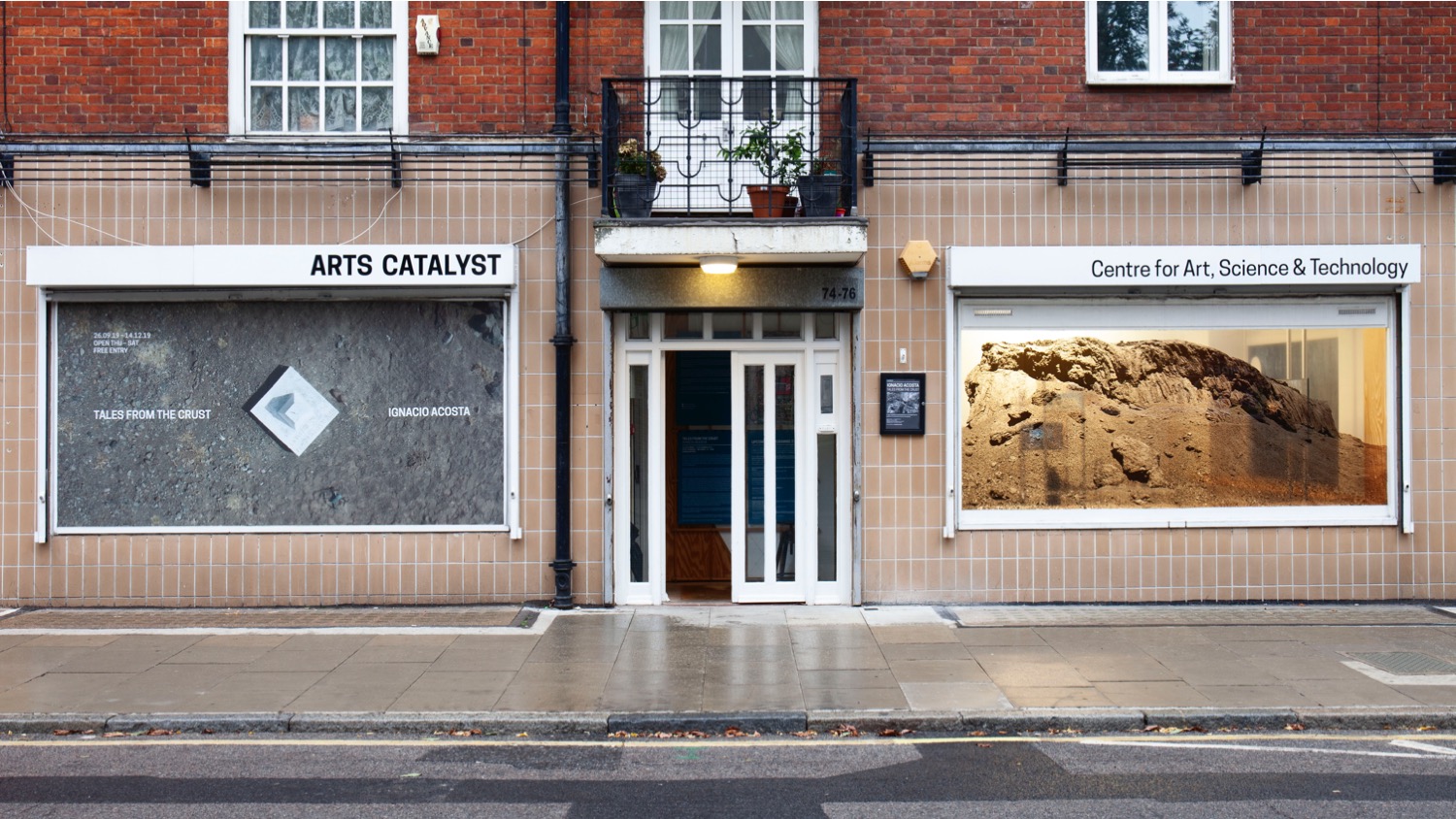 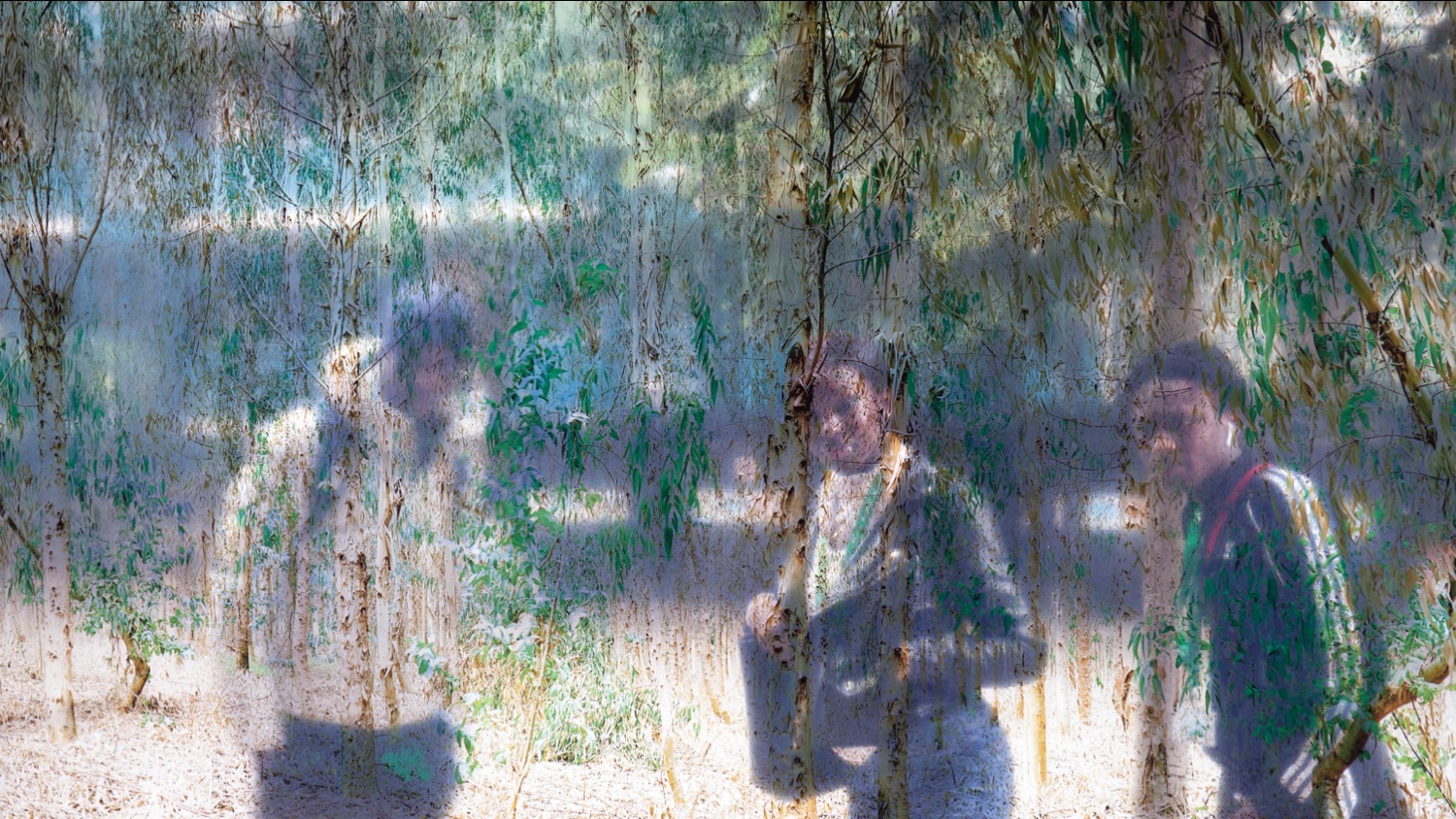 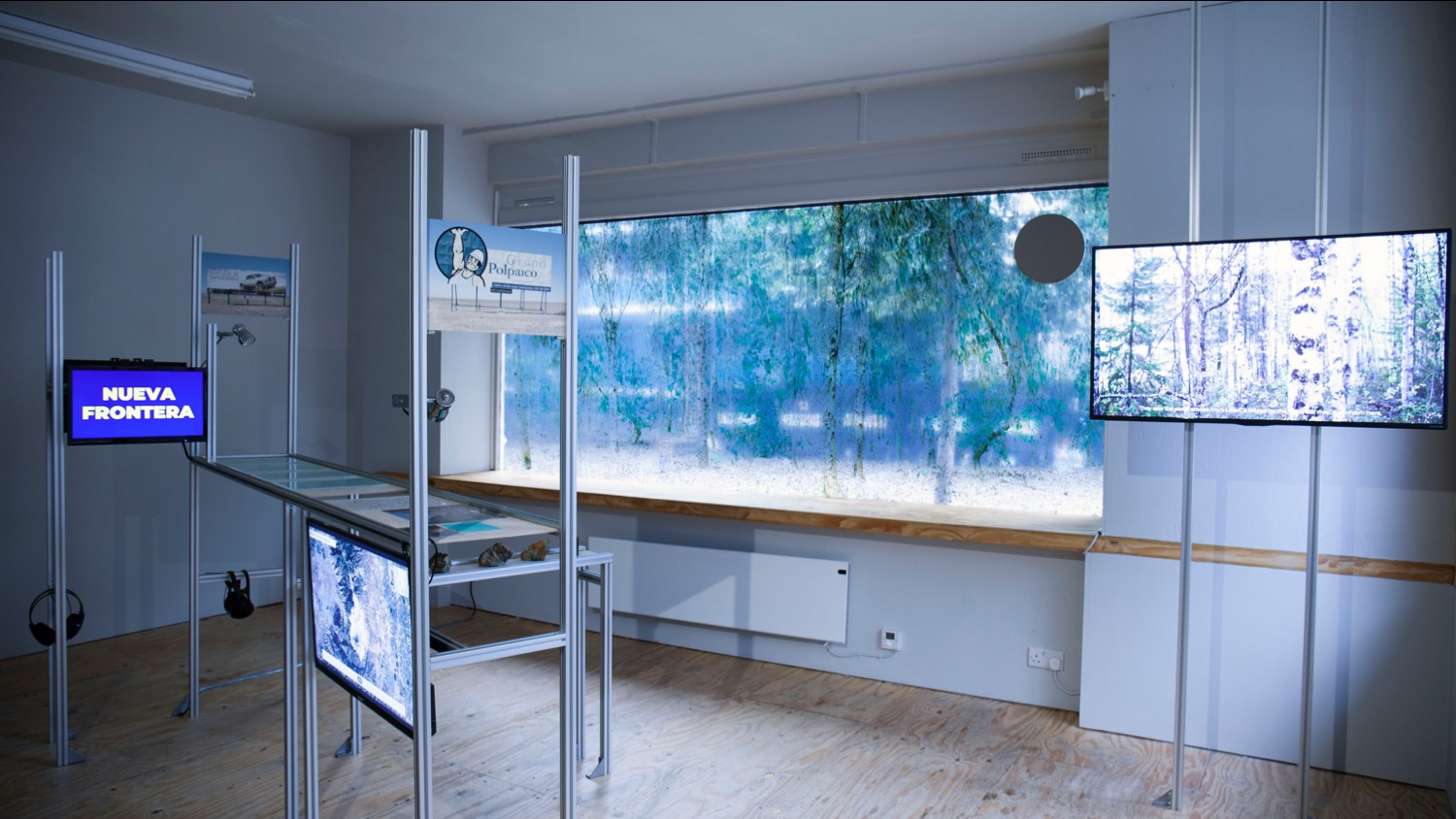 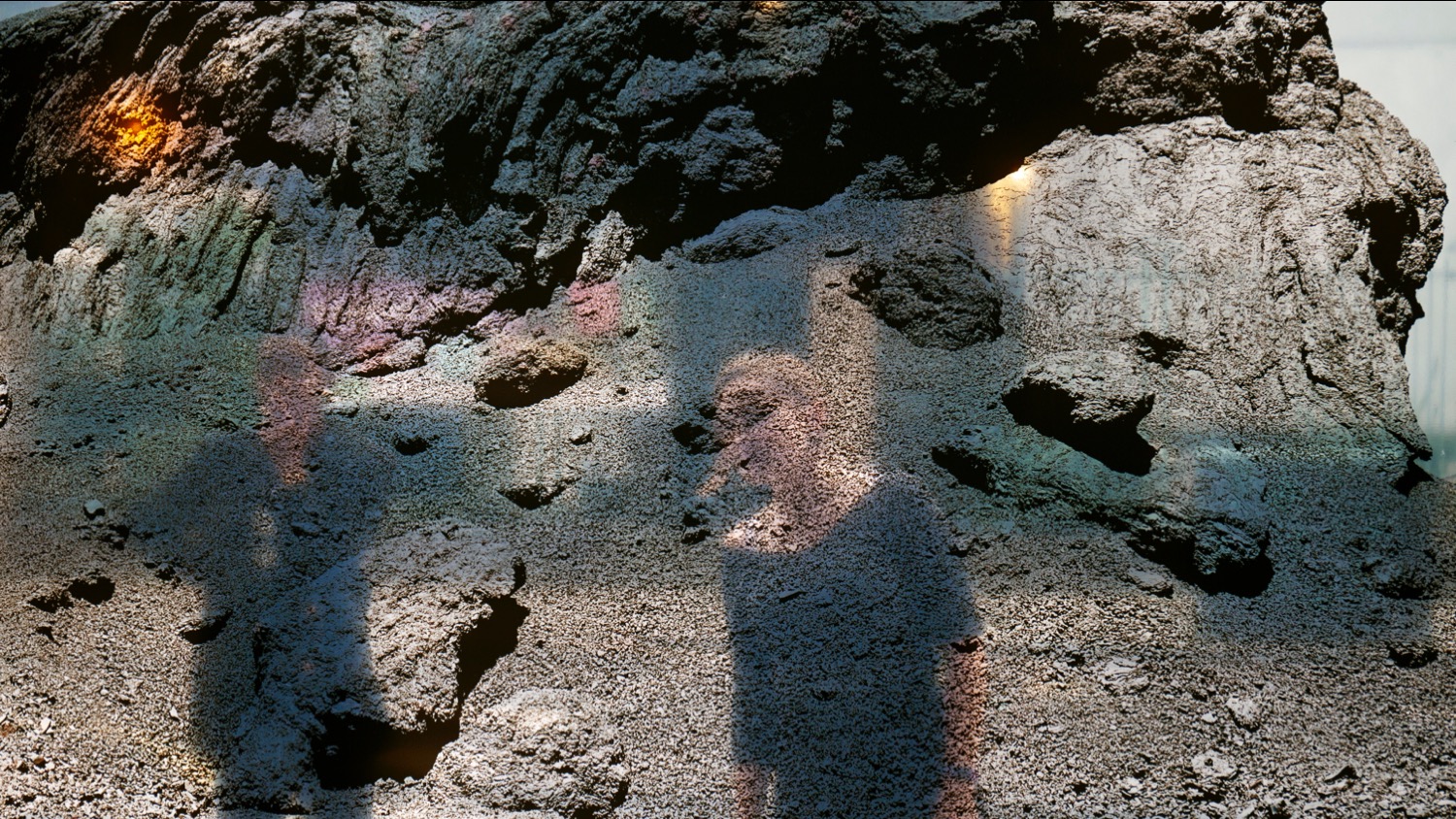 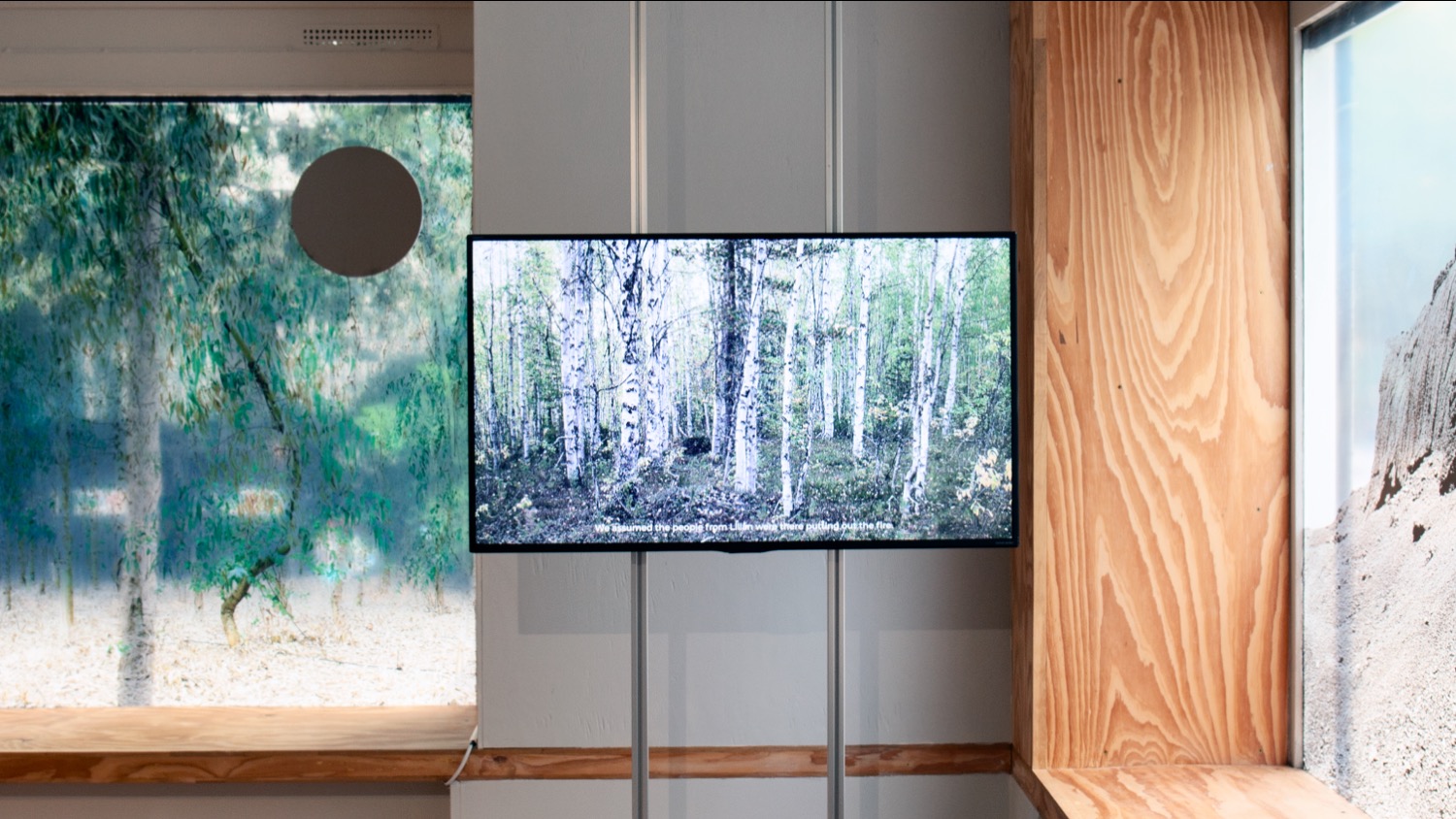 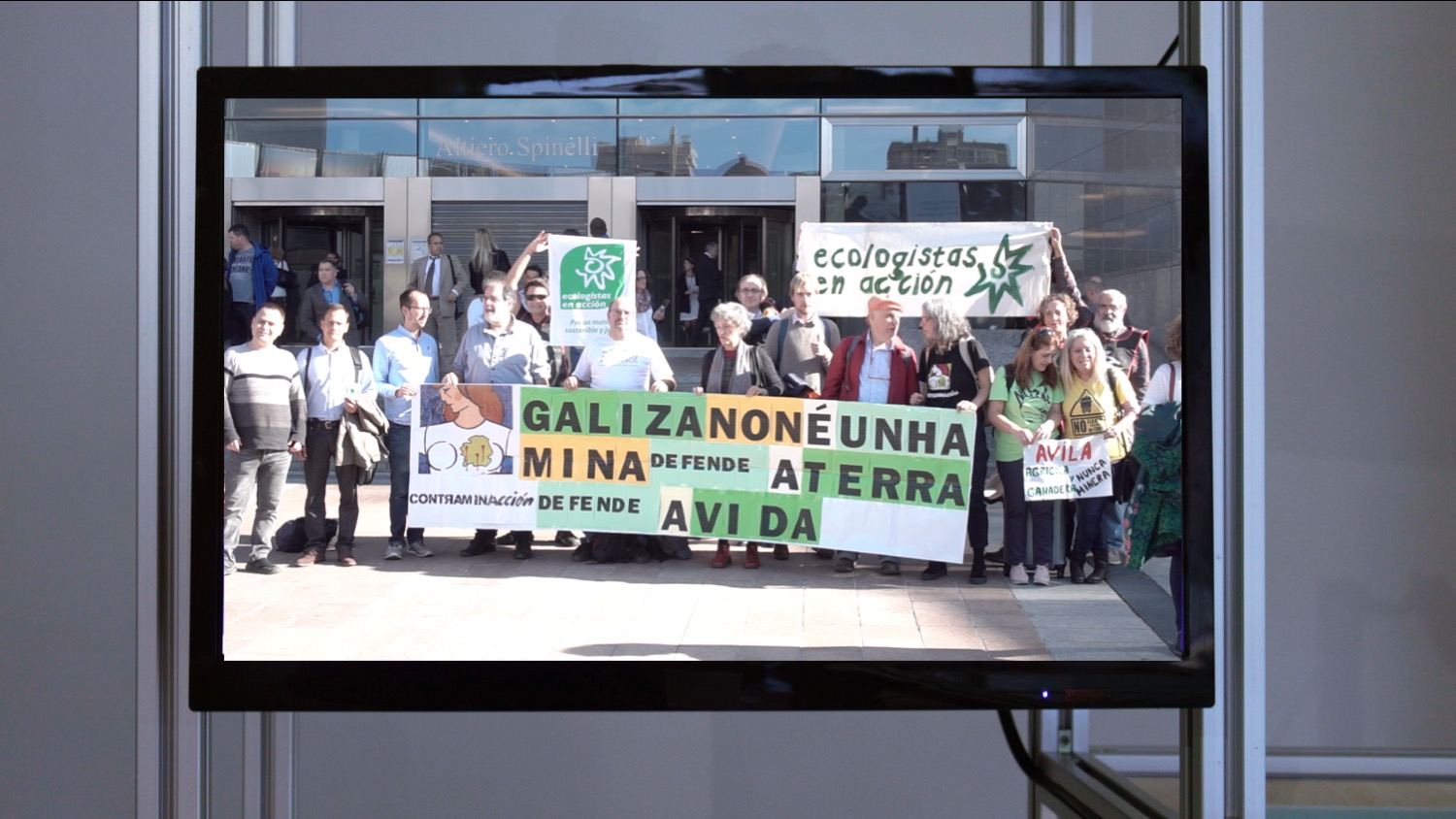 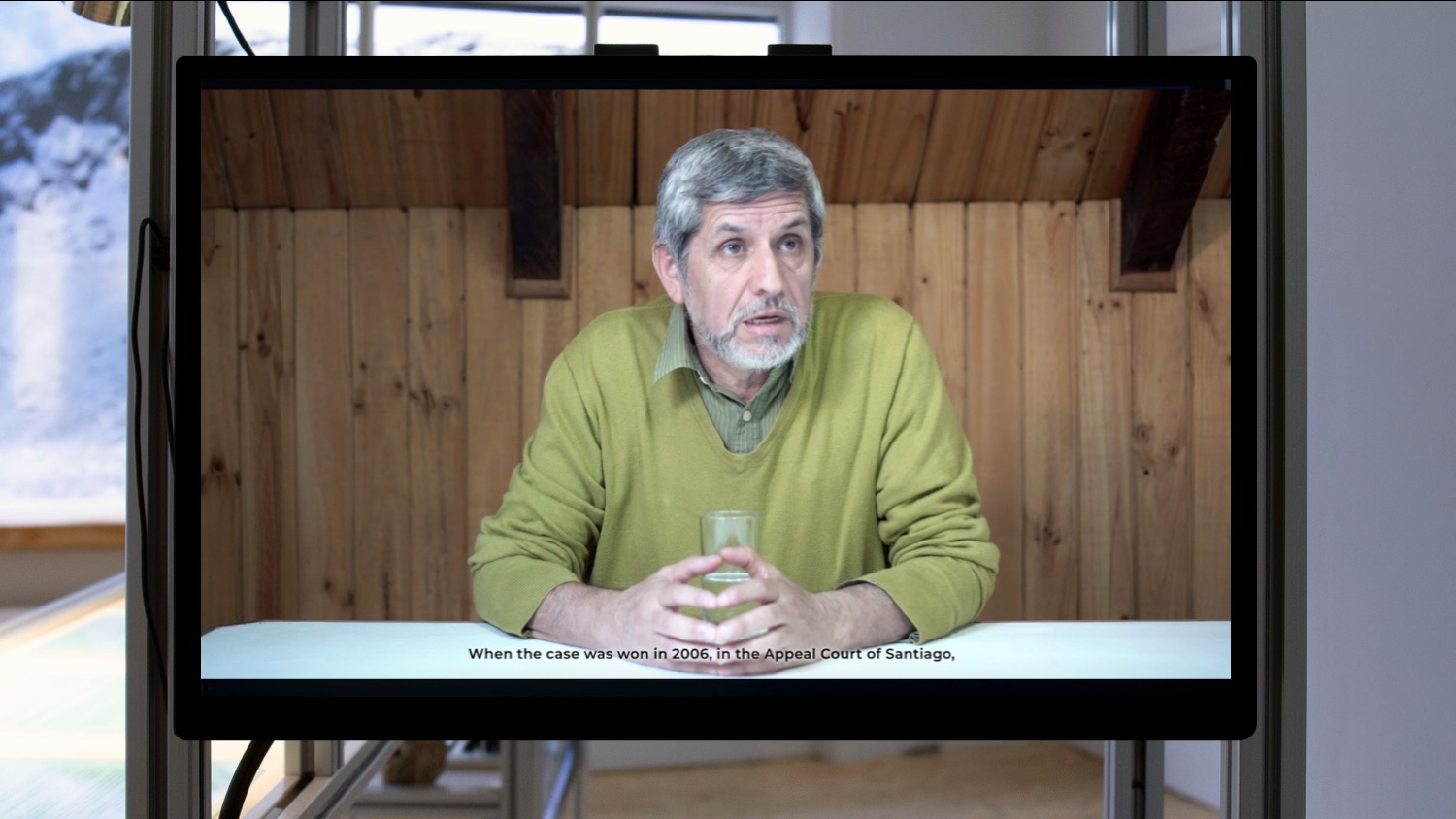 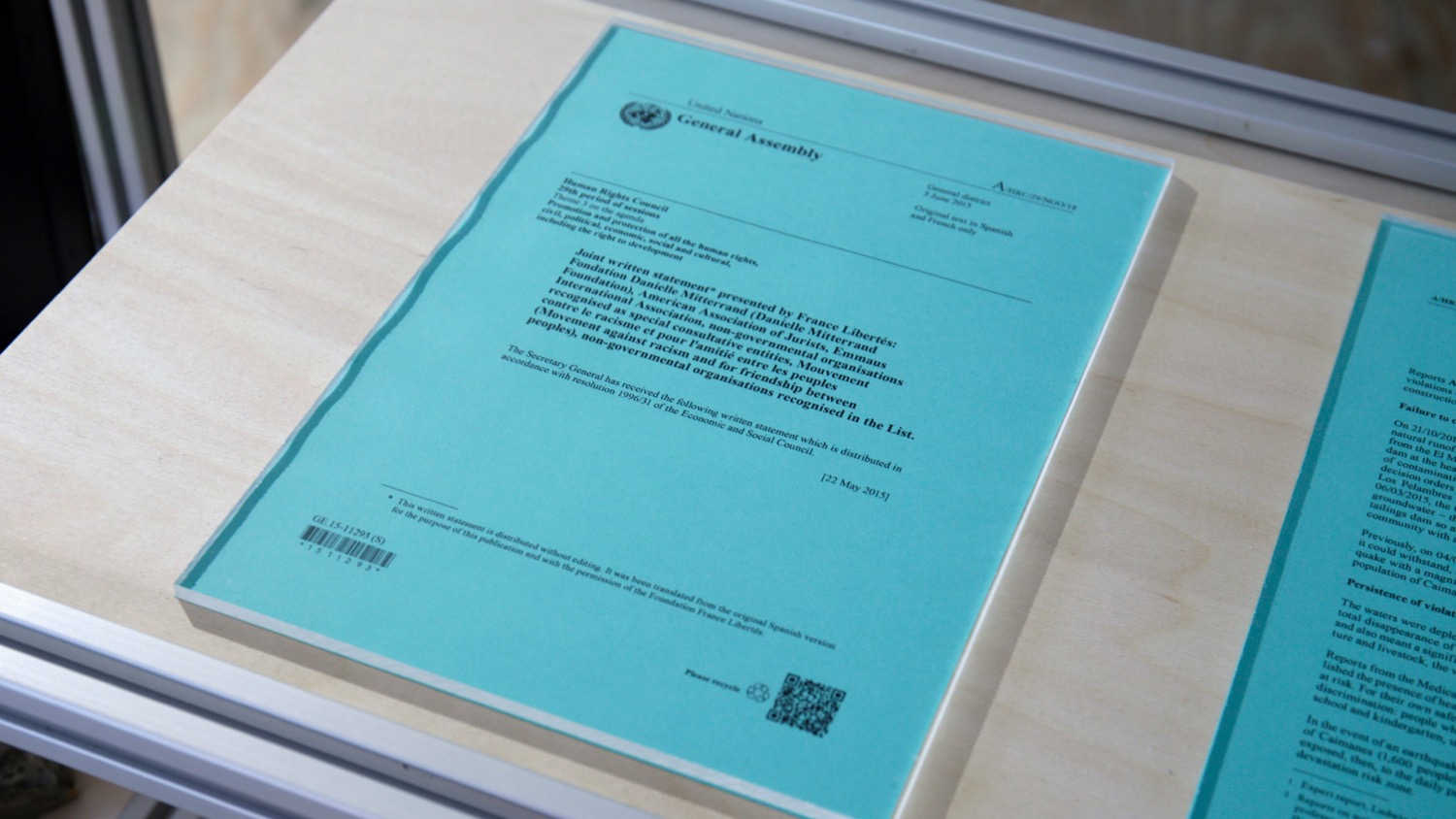 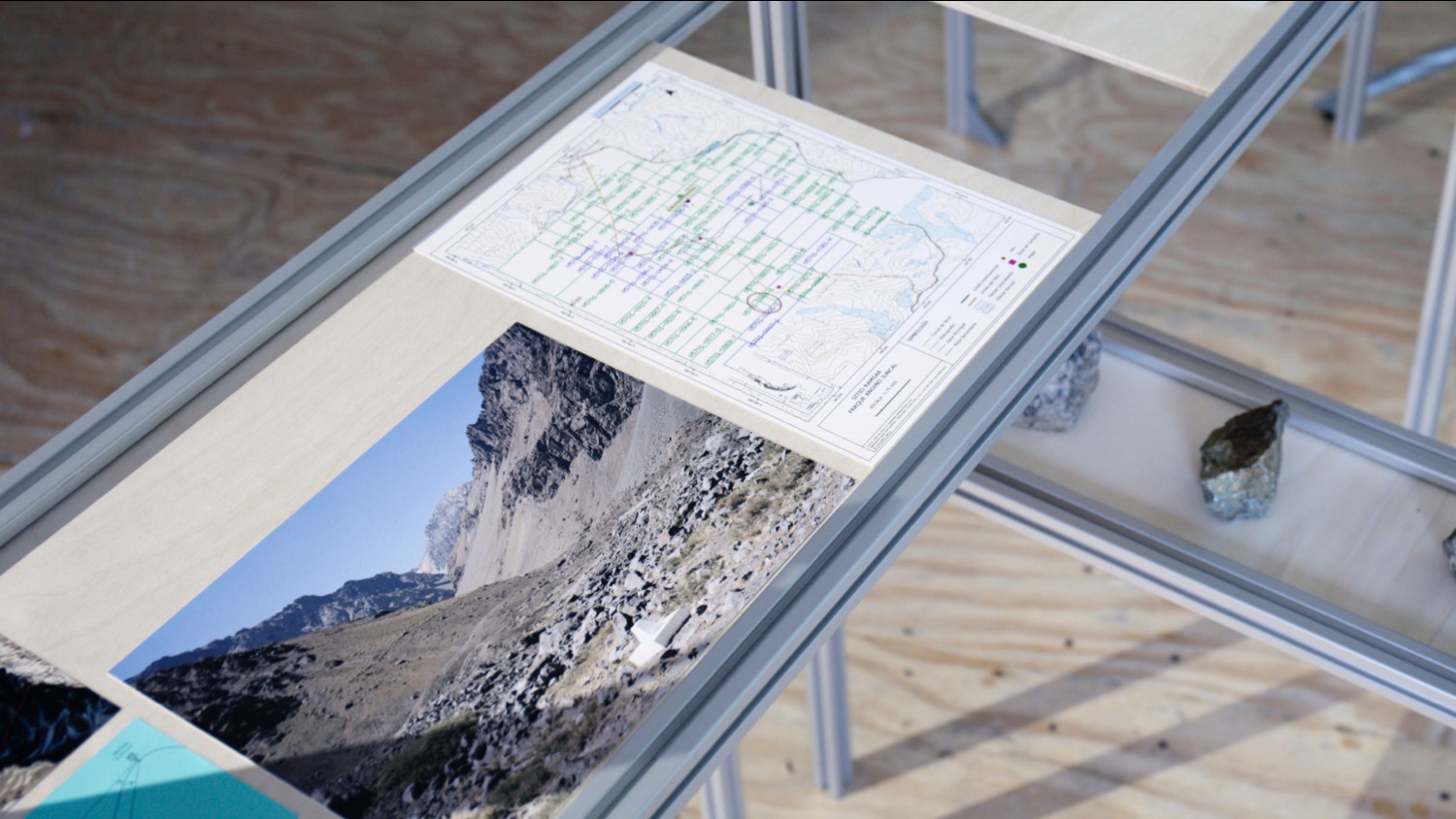 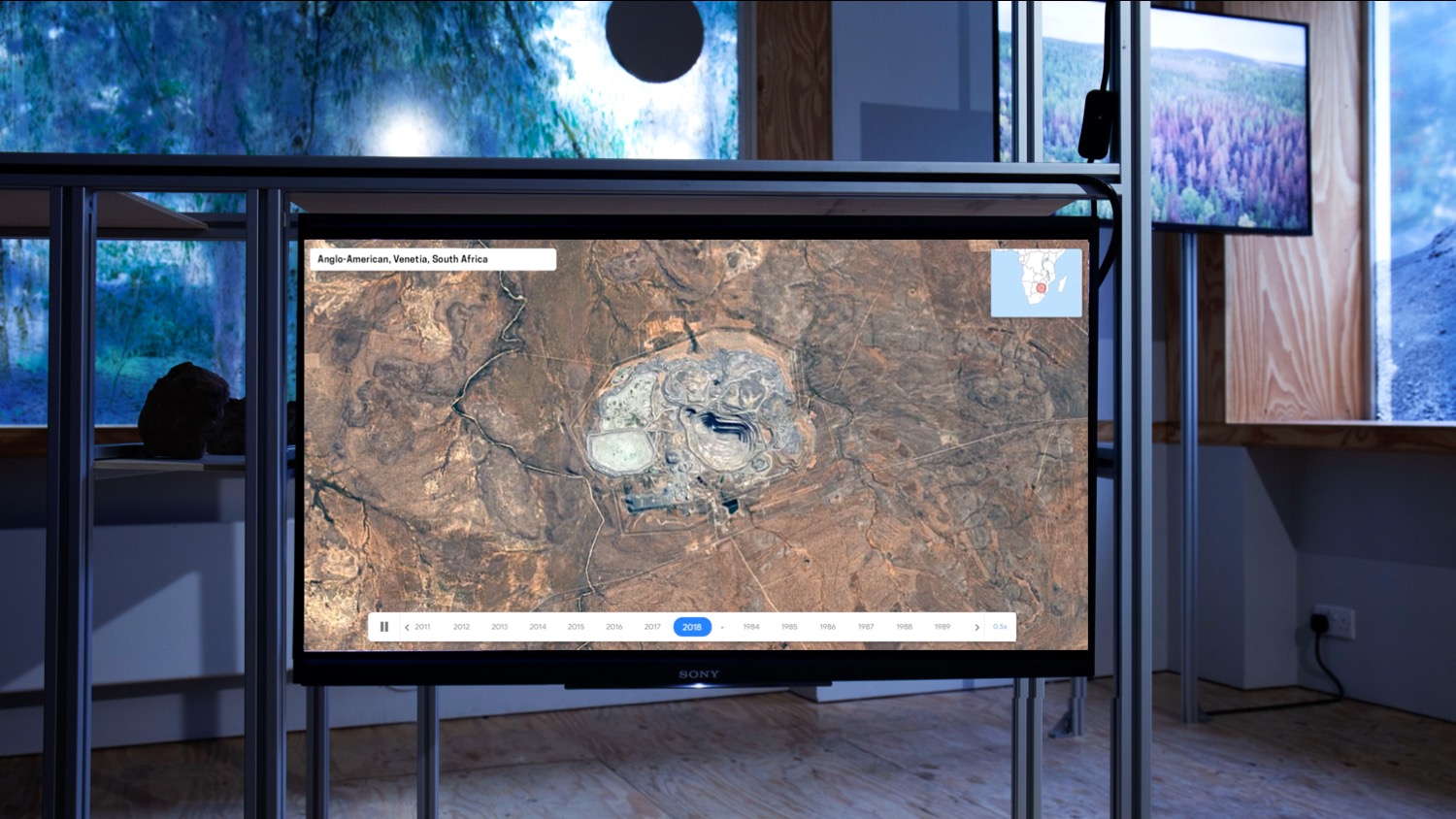 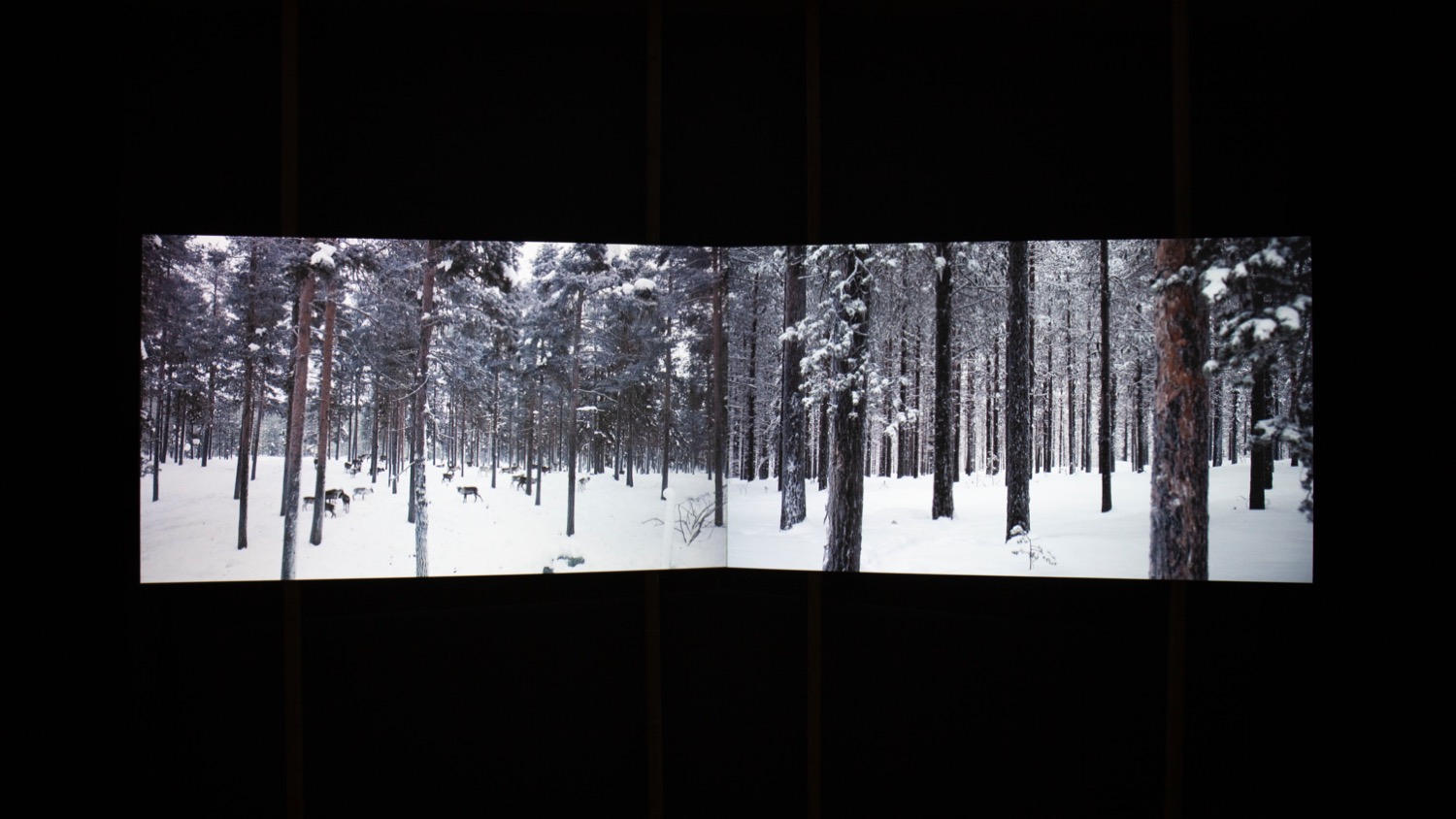 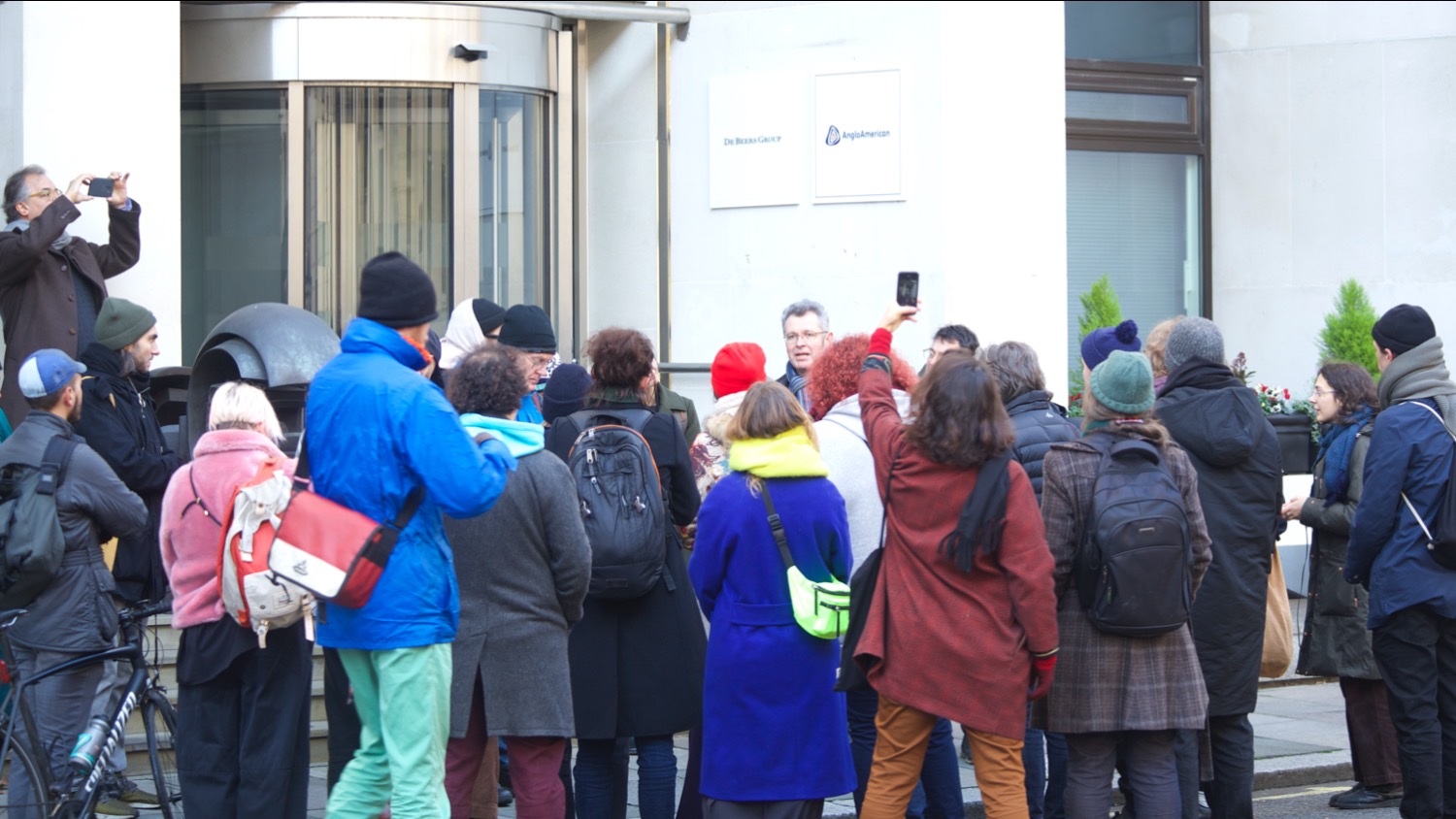 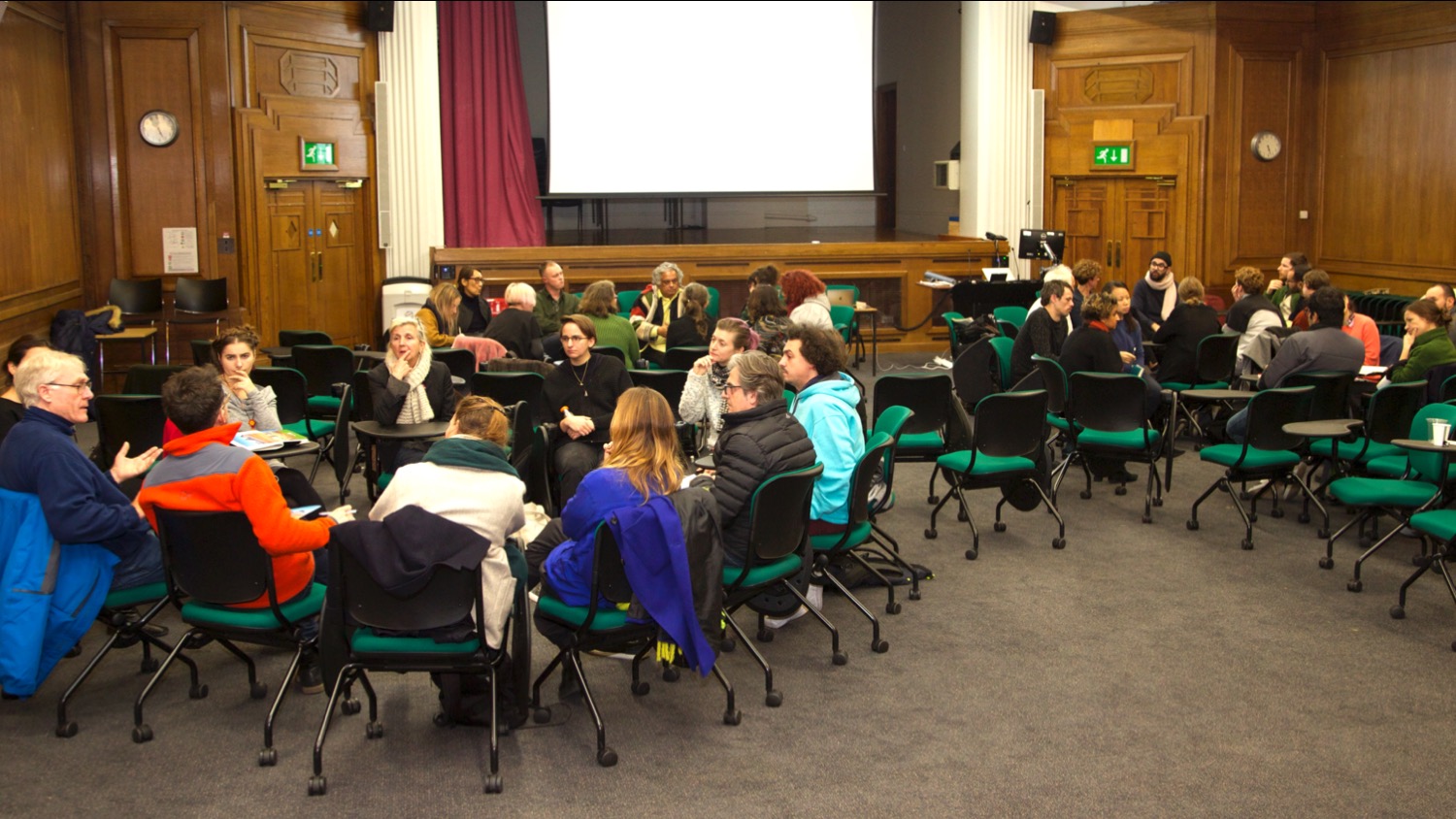 Assembly: Extractable Matters, University of Westminster, 2019
Building on ongoing research into extractive activities in Chile and Swedish Sábme, Tales from the Crust presents existing and new work, comprising documents, films, photographs, maps and objects. The programme hones in on ways in which local and transnational acts of resistance are making use of technologies (such as drones) in order to monitor the impacts of extractive industries and develop micropolitical strategies.

The exhibition is accompanied by Resistance Labs, a series of discursive events, workshops and broadcasts that bring to the fore existing forms of solidarity between various anti-mining movements, and address the role that counter-actions can play on a planetary scale.

Through an in-depth visual and spatial exploration, the works presented in the exhibition are articulated as a series of overlapping case studies of extractive violence. These include Parque Andino Juncal, an Andean conservation park currently fighting against mining exploration; and Caimanes, an agricultural town heavily affected by water contamination and scarcity by Latin America’s largest toxic dam El Mauro from Los Pelambres copper mine.

In the film installation Litte ja Goabddá (Drones and Drums) Ignacio Acosta explores how the Sami indigenous communities are using drones as a way of resisting the mining exploration at Gállak in Jåhkåmåkke (Jokkmokk) in northern Sweden through an indigenous lens. Based on research visits and close collaboration with activists and Sami families living and working in the area threatened by the mines, the project explores the link between drums and drones as navigation and communication tools.

This multifaceted spatial narrative is populated by the overlapping voices of activists, indigenous people and archaeo-astronomers – bringing together a constellation of stances rooted in the distant to recent and present geographies of extraction, exploitation and trauma. Here, filmed interviews, close-ups of resilient landscapes and cartographies of global power expose forms of human and non-human resistance.

As part of the exhibition, Nexus, an environmental project exploring global challenges connected to water, food and energy based at Imperial College, have contributed a series of digital resources mapping sites of extraction.

Tales from the Crust forms part of Extractable Matters Arts Catalyst’s new thematic strand exploring extractive capitalism and the politics that underlie its spatial infrastructure and logistics. Starting with an exhibition in autumn 2019 by artist Ignacio Acosta the programme reflects on ways in which capitalism extracts and exploits both material and immaterial resources, such as minerals, labour, data, affects, cultures and resistance. Through exhibitions, artist residencies and public programmes, over six months Extractable Matters provides a polyfunctional context for discussions inquiring how extractive infrastructures – as well as borders, conflicts and trades attached to them – impose uneven maps of power.

The works presented in Tales from the Crust have emerged from Traces of Nitrate, a research project developed in collaboration with Art and Design historian Louise Purbrick and photographer Xavier Ribas, based at the University of Brighton and funded by the Arts and Humanities Research Council (AHRC); and Drone Vision, a research project based at the Hasselblad Foundation / Valand Academy, Gothenburg University led by Dr Sarah Tuck.

Tales from the Crust is supported by funding from Arts Council England, Pluriversal Radio and the CREAM (University of Westminster)

Link to Tales from the Crust
Link to Assembly Extractable Matters
Artist talk: Extractive Violence Between Europe and Latin America, Ignacio Acosta in conversation with Elena Solis and Godofredo Pereira