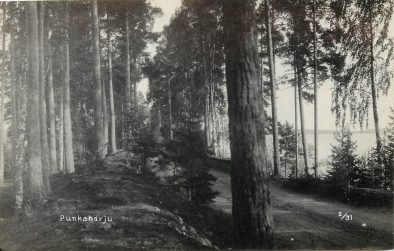 The looming forest - another world, and doubtless our wild origin - touches us, surrounds us, permeates us, and doesn't leave us. Michel Serres

'Green Gold' is new body of research on Finish wood production, which stems from my previous work on copper. It focuses on the intersection between capitalism forms of production and forest ecology, drawing upon notions of man’s control over and mastery of nature.

Forest is Finland’s foundation stone. However, forest social ecology is facing increasing challenges. On one hand, global warming has produced substantial changes in forest behaviour. On the other, cellulose and pulp production have moved abroad, raising unemployment and economic slow-down.

'Green Gold' aims to make visible Finnish timber production, its place in the global world economy and impact of the industry on the earth.

The project develops a site-specific working methodology through extensive archival research and sustained fieldwork. Firstly, archival research will be conducted in Helsinki to collecting visual/ written material on history of the Finish timber trade from the Forestry Ministry's archive at the National Archives of Finland. These images will be re-created in the studio with graphite pencil drawings. Secondly, a documentation of sites of timber production will take place using an analogue large-formal view camera. These include; forests, sites of scientific research and industrial facilities, as well as material products made with Finish wood, amongst others.

We have entered the ‘Antropocene’, a term coined down by chemist Paul Crutzen and biologist Eugene Stoermer in 2000. This is a new age in which humans are the main drivers of geological change. The product of intense environmental degradation and intense resource exploitation. This new chapter in the history of the Earth is marked by the devastating impacts of global warming, including high levels of carbon dioxide, desertification, deforestation, melting ice, a rising sea level and a massive extinction of species. As a product of global warming, some species, such as foxes, butterflies and alpine pines have moved further north in the search for cooler areas. Due to increased temperature levels in the south of Finland, the growth of Norway spruce has been reduced, and that of Scots pine and birch is increasing. For Michel Serres, humankind is more conscious of the devastating effects of Western modernity over nature and today, more than ever, there is a pressing need for a new “natural contract” in our ‘relation to material objects and nonhuman life forms’.

Forest is Finland’s foundation stone. However, forest social ecology is facing increasing challenges. Based on a capitalist mode of production, which maximises economic profit, the market-driven industry uses a model of reforestation followed by harvesting. Although the Finnish model been traditionally based upon substantial forest research, it currently faces increasing challenges as result of climate change and the weakening competitiveness of the Finnish production in relation to other major competitive countries. On one hand, global warming has produced substantial changes in forest behaviour. On the other, cellulose and pulp production have moved abroad, raising unemployment and economic slow-down.

Outcomes
A workshop will be conducted at Serlachius Museum for local residents exploring the relationship between the timber industry, climate change and role of artistic practices addressing these issues. These activities will be followed by a talk at the Finnish Institute in London to non-arts audience, to stimulate discussion and awareness of the timber industry and my artistic role.

Participants and partners
Serlachius artists in residency and local community

The Finnish Institute in London