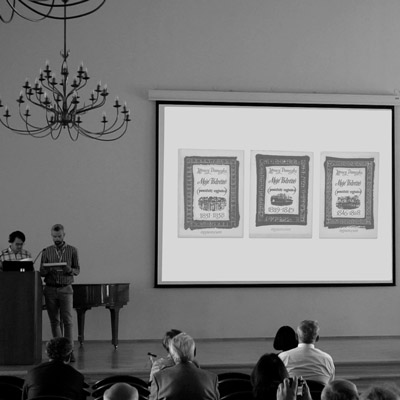 Mapping Domeyko: A visual arts project inspired by the expeditions of Ignacy Domeyko presents a selection of new works produced as part of ongoing research Mapping Domeyko conducted by Ignacio Acosta and Jakub Bojczuk. Since 2014 and based on Domeyko’s memoirs My Travels [Diaries in Exile], the artists have engaged in a series of journeys through the global trajectories of Domeyko in Belarus, Lithuania, France, Chile and Poland. The project builds an eclectic archive composed of drawings, historical photographs, objects, new photographic series and texts that reflect upon the global mobility of Domeyko, and political context in which he emigrated from Europe to Chile in 1838. This archive is organised in series and sequences that are presented as ongoing public engagement activities, such as exhibitions, publications and talks, attempting to provoke new ways of thinking in relation to notions of history, identity, mineralogy and visual arts.

This presentation focuses on a new sculptural piece titled The journeys of five rocks from Chile to Poland and other five from Poland to Chile (2017), produced in collaboration with Chilean artist Livia Marin. This work is based on an exchange of minerals facilitated by the artists in 2015, between two mineralogical museums where traces of Domeko’s expeditions can be found: the Museo Mineralógico Ignacio Domeyko, Universidad de La Serena, Chile and Muzeum Geologiczne Uniwersytetu Jagiellońskiego, Kraków, Poland. In the journey from museum-to-museum, the minerals were subject to a series of studies, in which they were drawn, photographed, and multiplied by a system of moulding and casting that took place at the Academy of Fine Arts (ASP), Gdansk in July 2016.